Do you know someone who has actively helped in the fight against counterfeit coins, bank notes and/or fake third-party encapsulation holders the past year? The Anti-Counterfeiting Educational Foundation (ACEF) is seeking nominees for its third annual Alan Kreuzer Memorial Award.

“This award is a prestigious honor to 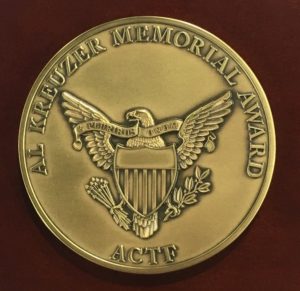 The award is named after the late Alan “Al” Kreuzer, a Castro Valley, California coin dealer who was instrumental in alerting the hobby to help identify counterfeit third-party certification holders and fake insert labels. After his death in 2016, his daughter, Chandra, donated $50,000 to help establish the Anti-Counterfeiting Task Force that now is part of ACE.

The deadline for nominating a candidate for the 2019 Kreuzer Award is May 31, 2019. Send the nomination to info@acefonline.org or fill out the nomination form below. Nominations must include the nominee’s full name, title and business affiliation, as well as nominee’s contact information and, of course, the reason he or she should be considered for the award.

The 2019 award will be presented during the Professional Numismatists Guild awards banquet on August 12, 2019, the eve of the American Numismatic Association World’s Fair of Money® in the Chicago suburb of Rosemont, Illinois.

Among its many accomplishments last year, the foundation and its task force provided
assistance in more than 30 active cases of counterfeit coins and precious metal
bullion products being investigated by U.S. Customs and Border Protection, U.S.
Homeland Security Investigations, U.S. Secret Service, and U.S. Treasury
Department’s Office of Inspector General. One case involved the arrest of a
suspect who possessed counterfeits that could have been sold for an estimated
$48 million if they had reached the marketplace.

If you'd like to be notified by email as ACEF finalizes investigations of counterfeits found online or elsewhere, please fill out and submit the form below!

The Anti-Counterfeiting Educational Foundation recently investigated a website, identified as ANCIENTGOLDEN, selling counterfeit monster boxes of gold and silver coins. After clicking this link, you’ll be directed to a product page promoting a monster box of 100 x 1 Draped Bust $2.50 gold pieces for a price of $399.00. Learn more about these counterfeit coins and sign up for our Counterfeit Alerts emails so you're one of the first to know!