Hints: Fakes are known of every U.S. coin design type produced by the United States Mint since 1793. Counterfeiters target bullion coins, bars, and holders with the highest brand identity.

Would you be surprised to learn that all the coins, bars and holders pictured are counterfeit? They are!

The Morgan silver dollar is the most frequently counterfeited U.S. coin, according to coin dealers responding to a survey conducted by the Anti-Counterfeiting Task Force in June 2018. 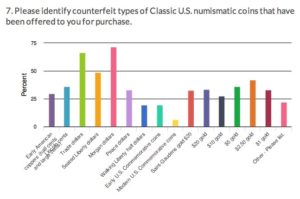 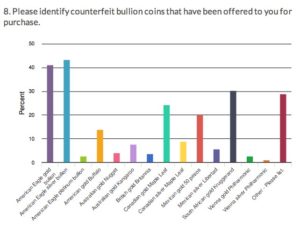 “The survey results are not surprising to us,” said Beth Deisher, ACEF Director of Anti-Counterfeiting. “Counterfeiters — primarily from China — target the most popular products, usually market leaders with the highest brand identification.”

She cited survey results in one other category, bullion bars. 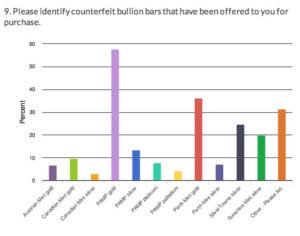 According to the survey, 92.4 percent of respondents said they rely on their personal knowledge of coins and bars to identify fakes and 60.6 percent use counterfeit detecting equipment to verify their suspicions. Some 41.4 percent report having completed counterfeit detection classes with the remainder having attended seminars or educational presentations detailing deceptive counterfeits in the marketplace.

More than 80 percent of the survey participants noted an increase in the number of counterfeit coins and bars entering the marketplace during the past five years.

The online survey of dealer members of the Industry Council for Tangible Assets, the Professional Numismatist Guild, and the American Numismatic Association was conducted June 7 through 14, 2018, by the Research Work Group of the Anti-Counterfeiting Task Force.

If you'd like to be notified by email as ACEF finalizes investigations of counterfeits found online or elsewhere, please fill out and submit the form below!

The Anti-Counterfeiting Educational Foundation recently investigated a website, identified as ANCIENTGOLDEN, selling counterfeit monster boxes of gold and silver coins. After clicking this link, you’ll be directed to a product page promoting a monster box of 100 x 1 Draped Bust $2.50 gold pieces for a price of $399.00. Learn more about these counterfeit coins and sign up for our Counterfeit Alerts emails so you're one of the first to know!